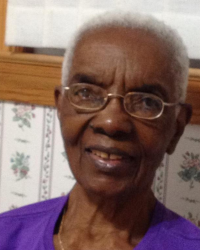 Annie was born in Browns Hall, St Catherine on August 31st, 1929. She was the second oldest girl of 13 children for Amy and Zephaniah Knight. She was originally named Henrietta and was initially a sickly child in her young years. On instruction from a family member’s dream, she was renamed Annie and was never sick again.  She was always an ambitious girl and did well in her primary and secondary school education. In her 20’s she migrated to the United Kingdom to pursue a nursing career. She had the great privilege of being one of the nurses in attendance when Queen Elizabeth visited the hospital where she was working.  While continuing in her profession, she met a handsome engineer who had also migrated from Jamaica to continue his education. His name was Horace and he soon swept her off her feet. The two were married on March 29th, 1958, and welcomed their first child, Norma a few years later.

After a couple of years, the young couple decided that they no longer wanted to experience the cold winters of England and they returned to Jamaica. In 1967, their son Harold was born. Annie believed in helping people and this was exemplified by being an active member and nurse at Saxthorpe Methodist Church and their clinic, and also as a Sister at the maternity ward at Nuttall Hospital where she worked for over 30 years, primarily at night.

As a wife, mother, sibling and friend, she was dedicated, dependable and trustworthy. In her later years, she enjoyed spending time with her husband, the visits from her children and grandchildren and developing her flower garden.

She was exceedingly loved and will be greatly missed.