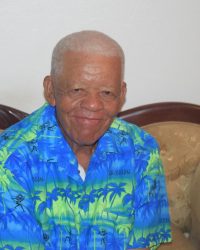 In his early years, Fagan moved to Kingston with no real plan in place. He was a determined man with big dreams of having a better life for him and his family.

Shortly after his move, he landed a job at Water Commission, where he worked for many years.

During this time he met the only woman he had ever loved, Barbara Barnett. Barbara and Fagan had 2 beautiful children, Everard (Paul) and Marie, and raised them with love, laughter and kindness. He loved his family (nieces, nephews, cousins,great grand kids etc) greatly, and placed them above all others. For Fagan, family meant everything. Especially his grandchildren, Rashida and Josh, who he spoiled without complaint.

Fagan was the type of person that made friends everywhere he went. It didn’t matter who the person was. He found a way to bring joy into that person’s life. He rhymed and danced for everyone he met, earning him the name, Mr. DJ. From the bank, taxi stand, credit union, hardware store, etc., people knew who he was. He was that joyful person that left a footprint in peoples’ lives. Rhyming was one of the most joyful things Fagan loved to do because he knew it would put a smile on your face.

Everywhere he went, he was always the life of the party. He would start singing and rhyming, and once he started, you really couldn’t stop him, and you really didn’t want to stop him because it made you feel so happy. That was one of his most important gifts, he made everyone around feel special and loved with his rhymes. That’s the thing about Fagan, he loved everyone, and they loved him right back. Entertaining people with his “lyrics” and dance moves brought life to his heart.

Fagan was also a jack of all trades, and a master of a lot. You name it, he could fix it.

He was lover of all things food and knew every restaurant from Portmore to Crossroads and everywhere in between. The people in these venues knew him because he brought joy, laughter and good vibes with every visits.

To know Fagan is to know that he only had 2 speeds in life: full throttle (which he started at the aching hour of 3am most days) and sleep. There was no in between. He was always on the move, and never rested for a moment because he knew there was always something that needed to get done, or someone that needed a laugh in that day.

He kept this steady pace until he was diagnosed with Alzheimer’s disease only 3 years ago, and even through this disease, he kept an upbeat attitude. He continued to laugh, rhyme and dance at the times that he could, and those times became very special to the people around him. We knew he was still in there trying to bring joy to our hearts.

He will live on forever in our hearts and all the hearts of the people he has ever met.