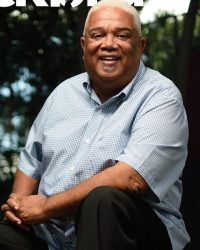 Volier Anthony Johnson was born on December 16, 1951 in St. Andrew to Elmina “Juanita” Smith of Connors, St. Catherine and Vincent Johnson of Nain, St. Elizabeth. His childhood was spent predominantly in St. Andrew where he later attended and graduated from the St. Andrew Technical High School. Volier’s love for the stage led to a lifelong career in the performing arts spanning 50-years.  His rise to fame started in a humble, but catapulting role in the timeless 1972 hit movie, “The Harder They Come”.  Balancing a career at the Sugar Industry Authority with life on the stage, Volier eventually turned to acting full time in the early 1990s, quickly becoming a household name locally and throughout the Jamaican diaspora. There, he continued to shine, receiving theatrical awards including an Actor Boy Award (1996) for the role of Festus in Toy Boy. In 2013, Volier received the Order of Distinction for services to Jamaican theatre.

Artist, comedian, Jamaica’s Santa, husband, father, grandfather, brother, friend went to perform on a higher stage on July 9, 2021.  While we will miss his dynamic personality and zest for life, he will be fondly remembered for his ability to “mek yuh laugh ‘til yuh cry”. Volier was everything Jamaican which manifested in his determination, artistry, love of music, dancing, good food or just liming with friends and family. Mostly he will be missed for his generosity, patience, compassion and his commitment to friends and family. He has gone to prepare for those who love and adore him, and we look to the day we will laugh with him again.

God’s blessings touch us through the hearts of those we hold most dear. There is no one like you, Volier. You are God’s gift to a nation. We will miss you dearly.